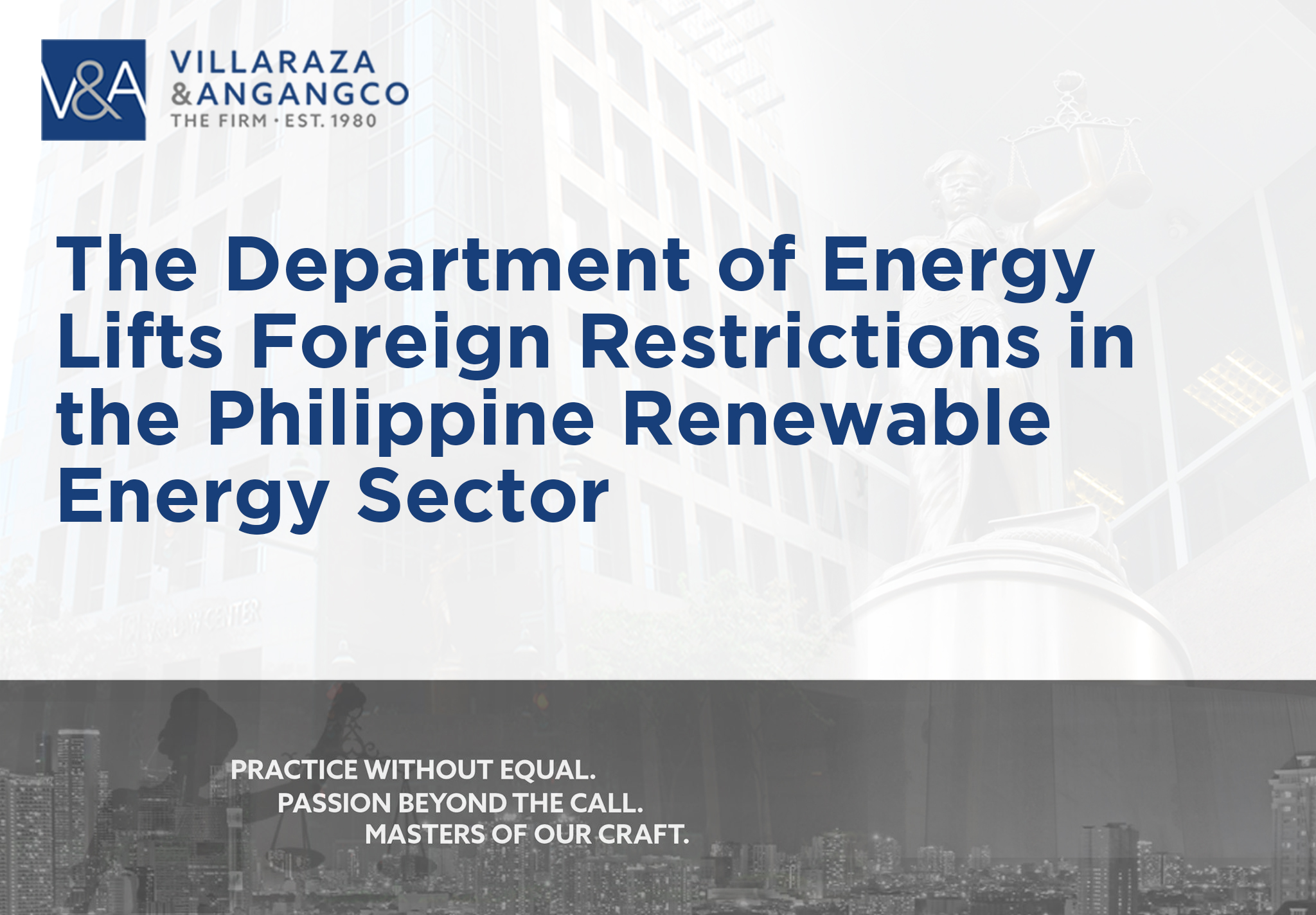 Foreign citizens or foreign-owned entities may engage in the exploration, development, and utilization (“EDU”) of the country’s renewable energy (“RE”) resources such as solar, wind, biomass, ocean, or tidal energy following the amendment of Section 19 of the Implementing Rules and Regulations (“IRR”) of the RE Act of 2008.

Previously, the IRR of the RE Act limited participation in the EDU of RE resources to Philippine citizens, or corporations or associations at least sixty percent (60%) of whose capital is owned by Filipinos. This was based on the same limitation imposed by the Constitution with regard to natural resources, and the interpretation that the same included RE resources.

Offering a different point of view, the Department of Justice (“DOJ”) issued Opinion No. 21-2022 (“Opinion”) on 29 September 2022, stating that natural resources as defined under the Constitution should not include RE resources. The DOJ explained that the term “natural resources” should be understood to cover only those things capable of appropriation, and thus excludes RE resources such as the sun, wind, and ocean. Likewise, the compelling reason for the limitation under the Constitution was the fear of depletion of the Philippine’s natural resources resulting from foreign exploitation. This reason, however, does not apply to RE resources which are considered inexhaustible or unlimited.

It is on the basis of this Opinion that the IRR of the RE Act was amended through the issuance of Department of Energy (“DOE”) Department Circular No. 2022-11-0034 on 15 November 2022, effectively lifting the limitations on foreign participation, and consequently qualifying foreign citizens, or entities more than forty percent (40%) foreign-owned, to engage in the EDU of RE resources. The DOE noted, however, that the appropriation of Philippine waters, including power generation directly from such sources, remains covered by foreign ownership restrictions, pursuant to the Water Code.

With this development, the DOE expects a growth of foreign investments in the RE sector, providing a significant boost to the Philippine economy and assisting in the increased integration of RE-based power generation throughout the country.

The amendment will take effect fifteen (15) days upon its publication in two newspapers of general publication and filing with the University of the Philippines Law Center - Office of the National Administrative Register.