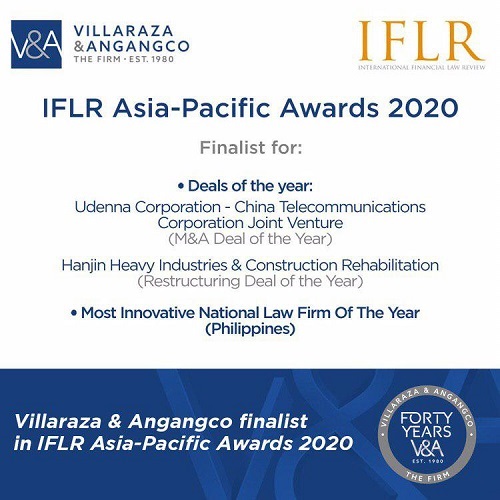 We congratulate our M&A and Restructuring teams for its role in the Udenna Corporation - China Telecommunications Corporation JV and the Hanjin Heavy Industries & Construction Rehabilitation deals, which have been nominated in the IFLR Asia-Pacific Awards 2020 as M&A Deal of the Year and Restructuring Deal of the Year, respectively. We are truly honoured to have been part of two out of the three nominated deals involving the Philippines.

Villaraza and Angangco is also one of the four law firms nominated for Most Innovative National Law Firm of the Year for the Philippines.

We are grateful for your continuous recognition and support.
View the IFLR Asia-Pacific 2020 finalists here: https://www.iflr.com/Article/3914822/IFLR-Asia-Pacific-Awards-2020-shortlist-revealed.html